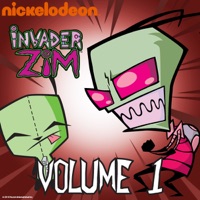 The Irken armada is poised to conquer the universe, but it would be a lot easier without Invader Zim! Thickheaded, brash, and overzealous, Zim has been banished into food service for wrecking the Irken home planet. He begs the Almighty Tallest for a second chance to reclaim his honor. Zim is sent on a "secret" mission to a planet far away on the edge of the universe – Earth. Now Earth's only hope rests with a young UFO-hunting paranormal enthusiast named Dib. Seeing through Zim's human disguise, Dib makes it his sole mission to defend our planet from this fiendish alien menace.