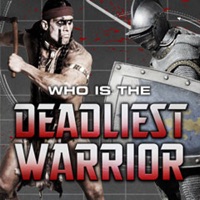 Each week on Deadliest Warrior, a new episode pits two of the most feared warriors civilization has ever known against each other. Along with the use of 21st-century science and the latest in CGI technology, each episode enlists warrior-specific world-class fighters and experts to provide insight into what makes these combatants tick, analyzing every facet of their unique skills of destruction, culminating in a head-to-head final fight between two legends of the battlefield that will produce the deadliest warrior. Other highly-anticipated showdowns this season include: Pirate vs. Knight, Taliban vs. IRA, Yakuza vs. Mafia, Viking vs. Samurai, Green Beret vs. Spetznaz, Maori vs. Shaolin Monks, William Wallace vs. Shaka Zulu, and Ninja vs. Spartan.