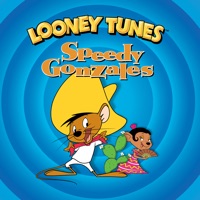 The fastest mouse in all of Mexico makes his way to iTunes in this exclusive collection of 15 Looney Tunes shorts. Produced and directed from 1953 to 1964 by legendary animator Fritz Freleng, these unforgettable episodes include Speedy Gonzales’s animation debut in 1953 with “Cat-Tails for Two,” followed by the 1955 Academy Award® winner “Speedy Gonzales” which introduced Sylvester the Cat (or “El Gringo Pussygato” to Senor Gonzales) as Speedy’s regular arch nemesis whose attempts to guard a Mexican cheese factory are foiled time and again by a certain very rapid rodent. Also making an appearance in this classic compendium is Speedy’s lethargic cousin, Slowpoke Rodriguez, who ambles his way through “Mexicali Shmoes” and “Mexican Boarders.” With special appearances by other one-of-a-kind characters like El Vulturo, the Bandito Bird and more, the fleet-footed comic-adventures of Speedy Gonzales are not to be missed. So, what are you waiting for? Ándale! Arriba!